Back in the beginning, our founders considered the best way to get from Lake Champlain to Lake Memphremagog in a paddle craft. There was considerable debate: the Missisquoi or the Lamoille? Donny Mullen, the first person to ground test the entire trail back in 2000, went up the Lamoille rather than the Missisquoi. In the years that followed a number of factors led the team to choose the Missisquoi as the official route. However, I have been wondering about the connection between the Lamoille and Lake Memphremagog for years. With the Canada US border closed, the pandemic has pushed me to finally scout it out.

On April 6, 2021 I met Russ Ford in Albany, Vermont to set a shuttle and scout out the reality on the From what we saw, I believe there is no enjoyable alternative to portaging the “river” segments from the northern end of Hardwick Lake to the Black River at Cemetery Road in Craftsbury. We were there at the height of spring melt – there was still enough ice on Lake Elligo to prevent us from paddling it. We put on at the outflow of Lake Elligo on South Craftsbury Road, but it was a tight, windy alder-infested route that will not be there at lower water. The total distance on VT Route 14 would be 5 miles if you paddle the Elligos.

Starting at Cemetery Road, the Black is a beautiful meandering river. We took about two and half  hours to paddle to Wylie Hill Road in Albany. We traveled 9 miles on the water, with an elevation loss of 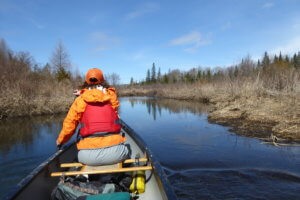 23 feet (or about 2.2 feet per mile). We didn’t come across any rapids, but there was a tree down that we had to crawl over and another we portaged around. The beavers are clearly in charge of this watershed, but we only had to cross one sizable dam after Cemetery Road.

The wildlife gave us a show on a sunny but cool afternoon. Right away we saw a red tailed hawk hunting above us. We came upon a pair of otters frisking about in a pool, so engrossed in their courtship that they were completely undisturbed by our passing. We saw and heard a large flock of evening grosbeaks chattering loudly in a stand of cedar trees. Finally, we heard wood ducks calling to each other further down in the watershed, and two pairs flew out of a stand of cottonwoods displaying their beautiful black and red markings. Perhaps the wildest sighting was of a friendly local on the riverbank. He waved, and we stopped to chat. We remarked on the beautiful valley, and he said that he had moved there in the mid-80’s to enjoy the quiet and the scenery. He told us of how the valley had changed over 35 years and who had come and gone. By and by, it came out that we were talking to none other than Bill “Spaceman” Lee of Red Socks Fame and who had once run for governor of Vermont. If you run into him on your trip, tell him we say “Hi”!

Further Down the River:

I haven’t seen the river from Wiley Hill Road to Irasburg, but Russ paddled from Wylie Farm Rd in Albany to the Rt 58/ 14 bridge in Irasburg on May 8, 2021. That was 16.8 miles measured as a track on his GPS, rather more than the distance the AMC guide lists. It is an extremely winding river. There are no dams, falls, whitewater, or hazards other than a few sweepers and downed trees. It is entirely low gradient.

In the village of Irasburg below the Rt 58 bridge (and just upstream from the Mill Street bridge) there are the remains of a mill dam. Further down, a bit before Covered Bridge Rd there is a pretty good ledge. Russ recommends scouting below the 58 bridge at all water levels. Scout or carry (0.9 miles) along Under-The-Hill Rd, river left, from the Rt 58 bridge, continuing across the river on a closed-to-traffic cement bridge, and putting in down a steep bank at the intersection of the subsequent gravel track with Rt 58, or slightly further putting in from Covered Bridge Road. This carry avoids paddling a continuous boulder field plus a couple of ledges. He reports that he has never seen it at a water level that he’d want to paddle in a loaded tandem canoe.

Last summer, the NFCT mapping crew gathered and published a couple of resources for the lower sections of the Black.

Make sure you check out the Lamoille River Paddlers Trail site for detailed information on the Lamoille. http://www.lamoilleriverpaddlerstrail.org/. You can buy the LRPT map on the NFCT Store.